Why does arts and culture need to think about climate justice?

At Creative Carbon Scotland we are currently working on a project around climate justice and the ways in which it is relevant to the Scottish arts and culture sector. In this blog post I’ll introduce why we think this is important, discuss the context in Scotland, and share some of the results of a discussion event we held on 17 May 2022. 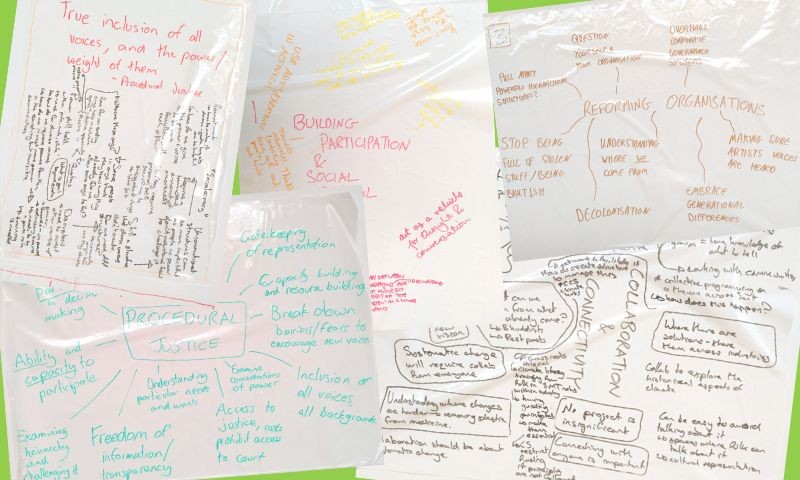 The basic idea behind climate justice is quite simple:

The logical consequences of the basic ideas are wide ranging and present major challenges as well as opportunities for more effective action on climate change.

Climate justice is not a new concept. The term has been in use for decades, stemming primarily from grassroots movements and organisations based in areas most affected by climate change. A foundational document, the Bali Principles of Climate Justice, was signed in 2002. These principles in turn pay tribute to the now 30-year-old 1991 Principles of Environmental Justice, a statement released to highlight connections between pollution and racism in the USA.

The concept has gradually been pushed from the fringes to centres of power. As of 2022, the Intergovernmental Panel on Climate Change (IPCC), which advises the United Nations on climate change science, now recognises many of the core ideas behind climate justice. In their most recent ‘assessment report’ they stated:

‘Vulnerability... differs substantially among and within regions, driven by patterns of intersecting socioeconomic development, unsustainable ocean and land use, inequity, marginalisation, historical and ongoing patterns of inequity such as colonialism, and governance.’

International negotiations on climate change are now frequently framed in terms of justice, with poorer countries pointing to the responsibility of wealthy nations that have historically contributed the most to climate change to now contribute more to the cost of addressing it. The interaction between climate change and inequalities is also increasingly highlighted, with UN Climate Conference held in Glasgow in 2021 including a day officially devoted to ‘gender’ as part of its programme.

The Scottish government made history in March 2012 by passing a motion ‘strongly endors[ing] the opportunity for Scotland to champion climate justice’ and establishing a £3million ‘Climate Justice Fund’ aimed at minimising the effects of climate change in the world’s poorest countries. Climate Justice remains an official part of Scottish Government policy and led to the establishment of a ‘Just Transition Commission’ in 2018. As a result, while the situation is not perfect, the Scottish context is in some ways more amenable to work on climate justice from the arts and culture sector than in the rest of the UK.

Although, the gravest injustices resulting from climate change occur on an international level that can feel hard to access from the perspective of Scottish arts and culture. There are a few key issues at play here in Scotland that are both local and connected with international issues. These include:

What role the arts can have

‘When I was a little girl I was taught the importance and impact of words. In my culture there is a proverb that goes, 'e pala ma’a ae lē pala upu'. It means that even stones decay, but words remain. A lesson in knowing how words can be wielded. How text can change everything. How each word you use is weighted. How switching one word or number can reframe worlds. How “climate action” can be vastly different from “climate justice”.’

This quote comes from a speech made at the COP26 United Nations climate conference by Brianna Fruean, a Samoan climate activist and member of the Pacific Climate Warriors group. It draws attention to how intangible matters of how we understand and express climate change can matter just as much as material issues of greenhouse gases and finance.

Climate justice recognises this by framing the issue not just as technical and scientific but also as social and cultural, entangled with social issues of inequality and discrimination. As an organisation, we have continually made the case for how arts and culture are needed to work seriously on the social dimensions of climate change, but the framing offered by climate justice makes this case even more strongly. Questions around ethics, social justice, and the influence of our history simply cannot be separated from the need to reduce global carbon emissions.

In May 2022 we held a discussion event with people coming from backgrounds in the arts, climate change and social justice to discuss the ways in which climate justice relates to arts and culture. The event featured contributions from speakers Judi Kilgallon of the Improvement Service, Aekus Kamboj of the Council of Ethnic Minority Voluntary Organisations (CEMVO) and theatre-maker and campaigner Ink Asher Hemp. This was followed by group discussions to identify keys issues and areas that we wanted to work on.

Here are some of the key thoughts from the presentations and ensuing discussions:

These are just a few of the initial ideas, which will form the basis for numerous avenues of enquiry. If you are interested in learning more about this project or contributing your own expertise to the research. Please contact lewis.coenen-rowe@creativecarbonscotland.com.

This project is part of the IETM Local Journeys for Change activity which is supported by the European Union as part of IETM Network Grant 2022-2024 NIPA: the New International in the Performing Arts.

Local Journeys for Change (LJC) is the new IETM programme for IETM members; aimed to empower them to bring positive change to their local professional context, local communities or policy-making field.

For this first edition of the programme, focused on the theme of Inclusivity, Equality and Fairness, the LJC selection committee selected 24 projects led by IETM members from 22 countries worldwide. They will benefit from training, mentorship, peer-review exchange and financial support to implement their projects in their respective local communities.

Why does arts and culture need to think about climate justice?