This third episode of the Rewiring the network for the twenties series evaluates the results of our most recent survey and maps the concerns withen our sector. 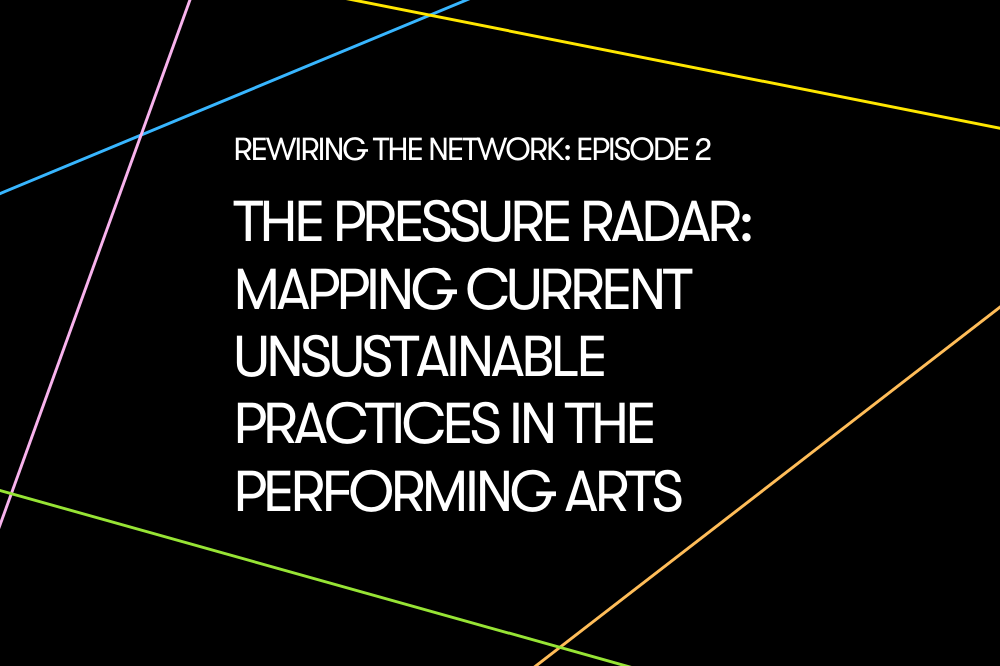 This text has been co-authored by Martina Fraioli and is part of a four blog posts series. You can read episode 0 and episode 1 here.

IETM was just preparing ‘Rewiring the network for the twenties’, an interactive trajectory to collectively design a more sustainable future for the performing arts, when the face of the world changed in a matter of just a couple of weeks. In the first episode of a series of blog posts, we introduced the 5 ‘promises and pressures of international networking, by revisiting the 40 year history of IETM. When the contemporary performing arts started networking internationally in the 80’s, the stakes were ambitious: the development of a whole ecosystem in Europe, with opportunities for artists as well as audiences. And international networks have been very successful. But: major shifts — both in the sector and in society — have put a huge strain on the 5 original promises of international networking. Where are we now? How do the pressures play out today, and what could be our promises for the future? That is what we are going to find out in the next two episodes of the Rewiring blog series.

A survey among the membership

In early February, to get the Rewiring trajectory started, we prepared a short survey with just four questions which were meant to help us better understand the challenges our members face with their daily work and get their views on what sustainable or unsustainable practices these days consist of.

We are going to use this material in a large online brainstorm, on the 19th of May 2020, to collectively design our preferred future transitions for the performing arts. Later on in the trajectory, we will infuse some ideas from system change and transition thinking. When launching the survey, however, we did not want to get mixed up in theoretical or semantic complexities about “sustainability”.

By “unsustainable”, we simply meant: a practice that cannot be continued at the same rate for social, economical, ecological or other reasons.

IETM members could optionally give one or two answers to the following questions:

The response to the survey was quite good. 133 people answered the survey and provided us with examples of current sustainable or unsustainable practices in the performing arts.

Who filled in the survey?

You see that the total is more than 100%. This is because a number of people combine two or more jobs.

Where are these people working? Here’s a graph that shows where the people filling in the survey reside:

We received answers from 36 different countries. Most answers came from the UK, Germany, France and Belgium. Most respondents are European, but there are also answers from people residing in Australia, the United States, Afghanistan, Angola, South-Africa and Zambia.

What we did is bringing together all the responses on an online whiteboard and clustering them. You can find and explore all the responses here, by zooming in and out on the board. Via the comment function in the left toolbar, you can even leave comments, reflections, remarks and emojis:

Rewiring the Network (for the Twenties) 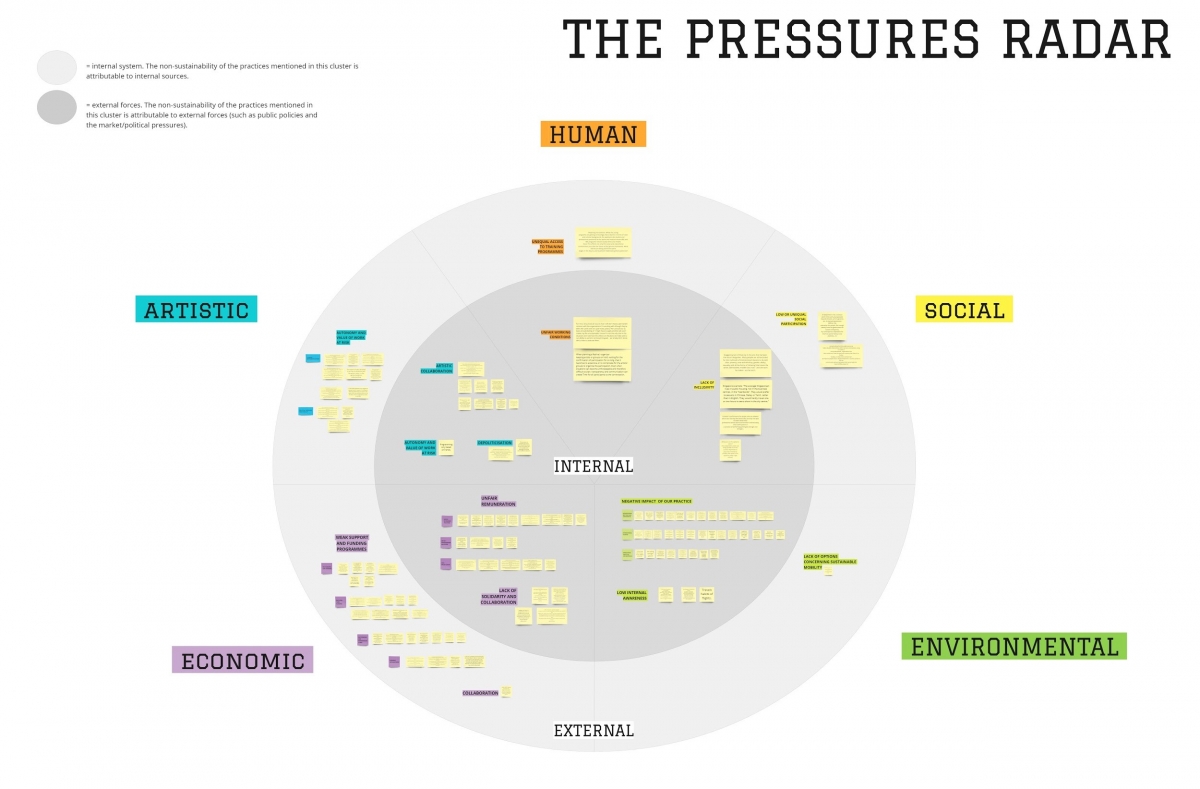 So, how to make sense of these 132 ‘typical situations, practices or habits… in the performing arts, that you were recently confronted with or took part in, which you would call “unsustainable”’? What are the red lines?

First, we distinguished an internal and external perspective.

Second, we distinguished between 5 value frameworks: the artistic, the human, social, the economic and the ecological value of the arts.

Building further on our ‘Reframing the International’ study, these 5 values can be regarded as the ultimate promises of our work to society:

So, what did come out of the survey? Generally, it is the idea that the current conditions in which we work are hindering us to achieve these values. We see the pressures in the same zones where we want our work to be valuable. We kindly invite you to explore the answers on the whiteboard yourself, leave a reaction via the comment function, as explained in the how-to frame on the whiteboard itself. But here are some crucial insights.

On the Pressures Radar, we see a number of current practices that put a lot of pressure on the intrinsic and artistic value of working in the performing arts. Not surprisingly, these pressures mostly come from the outside. We see several types of answers: some have to do with the instrumentalisation of the arts, with economic instrumentalisation as an often heard response. ‘The notion of value attached to art has a connection with the price it costs, in the general understanding of the audience’, someone wrote, or: ‘Artists are seen as civil workers’. There are some testimonies of countries or situations where arts are under increasing political pressure.

Not always do these pressures on artistic value come from the outside. A respondent mentioned the issue of programming being based on ‘trends’. Another respondent mentioned that we in the arts exclude ourselves from the political domain, by ‘not acknowledging the ideologies that stand behind different decisions’. A lot of people raised the issue that the conditions in which we create and produce have a negative effect on the artistic value of the work, for instance because of the sharp competition in the sector, leading to a blame game between the different parties involved in the creation, production and presentation.

There were not that many responses dealing with unsustainable practices hindering the social value of working in the performing arts. In the sector itself, the main issue seems to be a lack of inclusiveness: ‘Staggering lack of diversity in the arts that hampers the sector altogether. Many people are still excluded for the multitude of intersectional reasons to do with class, poverty, race and ethnicity, gender, ability, sexuality and all the forms of ‘othering’ that treats the white, able-bodied, middle-class man - and the work he makes - as the norm.’

This is of course a ‘wicked problem’, because the (performing) arts are part of broader society, where there is a lot of inequality and inequity, and a lack of social participation.

On our Pressures Radar, there is a lot of discussion concerning economic pressures. Once more, these pressures are imposed on us from the outside. There are a lot of issues with unsustainable funding models, with a.o. a lack of support for the independent scene and small-scale initiatives, lack of support for touring, issues with funding applications and - an overarching issue -- a focus on ad hoc projects and a lack of long term perspectives.

But, also the economic practices within the arts field itself -- in a way, our response to these outside pressures related to funding and other sources of income, are unsustainable as well… There are a lot of concerns about unfair remuneration. This is not felt by all people in the same way: in an economic system where short term perspectives are dominant, most of the economic risks are put with the artists.

The socio-economic position of independent artists and workers is clearly one of the  main issues on our Pressures Radar. This is not only an effect of external pressures (funding systems), but also of a lack of fair collaboration within the arts field itself.

On our Pressures Map, there is not a lot of talk or discussion about the effect the economic conditions have on the people working in the field. Also here, we see internal issues: the issue of fairness is of course not limited to remunerations, but also broader working conditions. Also, there are issues with a lack of opportunities for training and personal development.

There is a lot of worry and concern about unsustainable practices in the arts, which have a negative impact on the ecological value and natural resources. First, there are concerns about the limited ecological awareness in the sector, and the toughness of our habits. It seems we are addicted to flying (or: from the current perspective - we used to be).

These habits, of course, are linked to the way we have organised our (international) practice. First, there are a lot of concerns about travelling for short trips to meetings and conferences. Second, there are a lot of issues with the materials we use (and the lack of a circular approach).  The major catch-22 for the performing arts, not surprisingly, is the issue of international touring. How can you be ecologically responsible in a system that relies so heavily on international touring and mobility?

One of the survey respondents wrote: ‘Environmentally unsustainable: international touring of large companies - the environmental impact of this is huge. However, so many companies rely on international touring to make ends meet, and because there is a demand for international work and a hunger to experience culture from other spaces (which is great!). The impact not only of flights, but of hotels, one-off items, conception, and energy usage… is significant over time.’

Stay tuned for the Radar of Promises

Next week, we will continue with a more positive and hopeful perspective. In the survey, we asked not only about pressures and current unsustainable practices, but also about  new and alternative approaches (a project, a practice, an organisation, a collaboration…) which recently gave you the impression that you saw a glimpse of a more sustainable future for the performing arts. Next week, we will be introducing: the Radar of Promises.

The case for a Universal Basic Income: freeing artists from neo-liberalism

Streaming in the Just Transition: A Producer’s Guide to Measuring, Budgeting, and Lowering the Carbon Emissions of Livestreams and Video Conferences

Everybody wants a refugee on stage: Conversations around contemporary artistic engagement with migration