Valletta, the capital city of Malta, has just hosted the 7th World Summit on Arts and Culture, co-organised by IFACCA and the Arts Council of Malta. In spite of the very formal title and all those capital letters, this was one of the warmest and most pleasant conferences I have attended. The meeting evolved, quite unexpectedly, from a formal set of speeches and polite Q&A into a very humane, often personal and at some point very emotional conversation, with a plurality of voices and a good amount of time for free discussions and contacts after the sessions and during the breaks. Cherry on top of the cake: we could celebrate in real time the appointment of Nina Obuljen, who has curated the programme, as the Minister of Culture of Croatia - a great piece of news for all of us in Europe and beyond.

The two keywords of the conference (that you can watch entirely on Youtube) were leadership and crossroads. Leadership is a tricky word, with pretty negative connotations in several countries, due to the past but also to the present; and crossroads is a doubly interesting word in that it suggests a multitude of possibilities and at the same time can be used in many different ways (and it's also the topic of IETM's upcoming plenary meeting in Valencia).

With such fascinating words in mind, I landed in sunny Malta, hoping to learn a lot and to get some refreshing views from the truly international group of speakers in the programme. And because I have actually heard some interesting concepts, here is a very personal, definitely partial note. I avoid names and quotes as much as possible, just to ease the read, and I try to avoid distinguishing between recommendations for policy-makers and for civil society representatives, which were sometimes made during the speeches, because I believe we are all on the same side.

picture from the installation Crossroads by Antoine Farrugia

So, leadership. It's now clear that (cultural) leadership is not about ego, but also about letting other take the credit for the results. Shahidul Alam (Bangladesh) is an example of this, but he's also a living example of leadership as a delicate balancing act: he has recently got the highest award for artists in Bangladesh from the President, while exactly at the same time facing trial for criticising the government's take on freedom of press.

Leadership has to be shared: policy-makers, when believing in the power of the arts, should be at the same time bold in supporting the arts and pragmatic in acknowledging their own constraints, and therefore support those - artists and cultural leaders - who are more agile and can bring about change in a faster and more effective way.

Leadership is about finding the cracks in the system and using them to push change forward. It's about creativity, about having a big vision and bold actions, about daring to do things we've never done before; and it is also, in general, about change.

However there are different ways to be in the world and to be happy (that's what the notion of cultural rights points to), and therefore we can have very different understandings of "change". We need to develop a collective imagination for the future.

And so humanity is crucial - and it's a topic I badly miss in most conversations about culture in Europe today. We've been forced, particularly in recent years, to develop economic arguments to support the value of culture and the arts (what can you expect when so-called "European cultural policies" are not driven by a vision but by a purely economic strategy?); and the Alliance for the arts and culture is bringing forward other relevant arguments. But it seems that overall, rational arguments are not really working - and certainly they're not enough.

Hospitality, generosity and tolerance are values that artists and leaders have to defend and promote, if we want Europe (and the world) to deal with the massive amount of forcedly displaced people around the world. Another important word, trust, was literally put on stage by the performance "Lampedusa" at Spazju Kreattiv.

That, together with the breath-taking speech by Arn Chorn-Pond, founder of Cambodia Living Arts, and the strong presentation by Jo Verrent from Unlimited (UK), made me reflect on privilege. The privilege of being born and raised in a country in peace, on a continent that so far has been in relative stability; the privilege of being such a gathering, full of decision-makers, and being able to grab the microphone at some point to share your idea with almost 400 people at once (let alone the conversations you can have in the corridors or over lunch)...

Privilege, however temporary and volatile, goes with responsibility; and when you find yourself in a privileged position, with the possibility to speak out, silence too becomes a political act.

We were also reminded that we - in the room - are privileged comparing to those who cannot speak in such gatherings; those artists doing incredibly important projects but not able to get enough visibility and attention; those who are illiterate and yet are great leaders in their communities; but also those who simply cannot speak English, and therefore cannot be part of certain conversations. And so we have to build connections with society at large, with those whose voices are rarely heard in official gatherings and decision-making processes, but whose work is not less valuable. 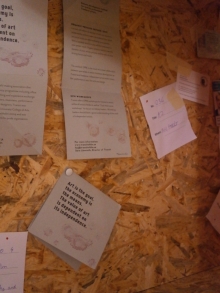 Picture from the Pop-up Creative Lab hosted during the meeting

And so, back to where we began from: in the panel on networks I was happy to hear the new word net-living. Romina Bianchini from Proyecta Cultura (Argentina) suggested that networks can be like ecosystems, like a wood, in which all the elements live together in a dynamic balance, and none of them ever dies, but rather transforms into something else, to nourish the others. This does sound like a beautiful possibility.

As for the crossroads, we'll have plenty of time to discuss the multiple meanings of the word at the next IETM meeting in Valencia. See you there!

p.s. the title "Malta happens" is a line from the performance "Limbo" at Spazju Kreattiv.

All pictures in the article are by the author