Bi-partisan government funding policy for arts in Australia has been under sustained attack and excellence in arts has been ‘transformed from aspiration to commodity’.

Only six months beforehand Australia was living what felt like a ‘new dawn of hope’ for the arts. A different government had released an Arts and Culture Policy – ‘Creative Australia’ with the promise attached to it of $236 million in new funds including $75 million to the Australia Council.

But by May 2016, Australian younger artists, independent artists and small to medium sized arts organisations whose practice and productions resist mainstream processes and classical notions of ‘excellence’ had been hit hard and many were quashed. They have suffered a targeted attack. Their ruinous state was revealed on ‘Black Friday’ May 13th this year when 65 small to medium art organisations had their multi-year funding support defunded by a financially crippled Australia Council of the Arts - the Government’s statutorily independent arts funding and advisory body which receives its funding from the Arts Ministry.

And whilst the entire Australia Council’s annual budget would buy just one Joint Strike Fighter, in May 2015 its funding was slashed. It was a stealth assault from a government marching to an ideological beat and an arts minister exercising his executive power muscle.

To some extent we should have seen it coming. In February 2014, following consternation by artists over the business interests of the corporate sponsor and patron of the Sydney Biennale, the recently elected conservative government’s attorney general and arts minister, George Brandis, proclaimed that arts organisations refusing corporate support would be stripped of government funding and “the pursuit of excellence across all of the artistic genres will be the central value of cultural policy under a Coalition Government”. 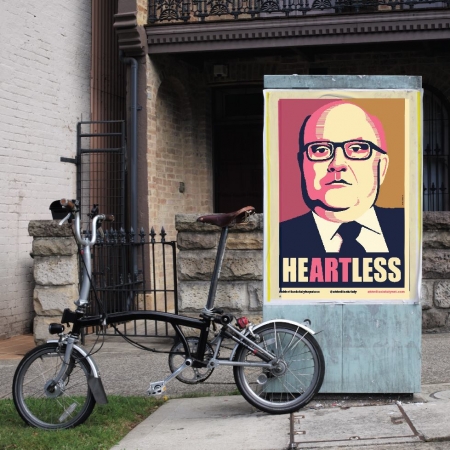 Stripped indeed…of $300 million AUS in successive budget announcements by the arts minister over the course of next 20 months and in the unprecedented 2015 attack where a further $105 million AUS was cut in one fell swoop, the Australia Council was almost brought to its knees. With arts funding representing just 0.16 percent of the $400 billion federal budget (an arts budget $650 million AUS), the nominally independent Australia Council was shattered. In the meantime, the arts minister created his own National Program for Excellence in the Arts. To do it he used the funding he’d withdrawn from the Australia Council.  But what exactly were the criteria for ‘Excellence in Arts’?  Proof of external funding from the private sector it seemed, and appeal to ‘the great audiences’ – individual artists were not eligible to apply.

By May 2016 the arts minister had “ripped 28 per cent of the Australia Council's discretional funding out of their budget; crippled through funding cuts the national collecting cultural institutions, including the National Library and the National Gallery; decimated Screen Australia and severely restricted the operations of the ABC. Scores of arts organisations, including AsiaLink, Australian Design Centre, Australian Experimental Art Foundation, Canberra Contemporary Art Space and the Centre for Contemporary Photography have lost their Australia Council funding.”
Quarantined from the Australia Council’s funding cut assault by ministerial decree were the major performing arts companies and institutions whose ‘excellence’ attracted philanthropic and board membership support from bank CEOs, company directors and merchant bankers. While power and influence played out in the corridors and on stages of ‘the majors’, their silence in the public sphere reigned. Those known for their eloquence were strangely hushed.

The symbolism of their silence cut deep. There was a distinct lack of leadership from…the leaders, and a paucity of representation advocating for arm’s length, democratic and transparent support for arts.

But didn’t we have a strong arts policy? Six years in the making and twenty years hence from the last policy, in March 2013 “Australia had a national cultural policy that saw culture as something worthy of government investment”.

The ‘Creative Australia’ policy instigated by the then incumbent Labor government offered a funding boost and reform to the Australia Council. They too employed the word ‘excellence’. They had allocated an extra $75 million to the Australia Council for ‘unfunded excellence’. But just six months later, a conservative Coalition government was elected and suddenly public funding for Arts in Australia became an ideological issue. While ‘excellence’ was still a guiding principle, ‘Creative Australia’ was left for dead.

That was 2013.  Sunrise became the sunset of bi-partisan support for arts funding and the Australia Council. The real, new dawn revealed a government for whom the chief target of attack was ‘all too often the ideal of public good or the broader commons’.

From now on, the great works of canonical classics for ‘great audiences’ were what mattered. For the rest, a competitive market and business know-how would decide their sort.
But from the smoke in the rising new dawn there rose a rumble of resistance. From among the many independent artists and small to medium arts organisations, including the company I direct, there grew a cohort of arts advocates. In the absence of money, power and the voice of most of the ‘the majors’, a social media campaign was created. It caught many by surprise with its effectiveness, humour, and creativity. There were on the ground protests covered by mainstream media which focussed on the ‘Excellence Raid’. The slogan ‘Free the Arts’ became a hashtag. Minister George Brandis inspired an online gallery of increasingly witty memes, and a peak advocacy group ArtsPeak  was created.

Independent senators took an interest when the Excellence controversy exploded in May 2015 with the arts minister’s grab from the Australia Council, enabling Labor and the Greens to instrument a Senate inquiry. The government was swamped with over 2,200 submissions. The inquiry travelled to every state in Australia carrying national media along with it. The Senate report recommended abandoning the Excellence Program and returning the funds to the Australia Council.  Though the recommendations were ignored, the inquiry galvanised the arts sector. It was what we needed. It was a democratic, bottom up push where indefatigable leaders rose from the chaos to mount a challenge. Rather than artistic works of resistance, collective resistance drew arts professionals together to champion democracy and broaden cultural debate.

In September 2015 a leadership challenge within the Coalition ranks saw a new leader elected to Prime Ministership…and Brandis as Arts Minister was dumped. The new minister overseeing the Excellence program handed back a portion of the funds to the Australia Council and the program was rebranded as ‘Catalyst’.  There was a 2016 election to focus on. The new look leader needed a smooth runway, good press and positive social media profile.

But the revolting arts sector wouldn’t go away. ArtsPeak continued its pressure. In the run up to the election there was a live broadcast of a national arts election debate. It was booked out. Reporting on the debate for the Sydney Morning Herald, Sasha Grishin - emeritus professor and art historian, critic and curator, wrote:
“It is difficult not to come to the conclusion that the Turnbull government (Conservative Coalition) has abandoned the arts as a sector, where it feels that it will never prevail. The (Coalition) Liberals won the previous election lacking an arts policy and feel that they can do the same again. The Greens, while great on rhetoric, have no possibility of forming government. They may hold the balance of power in the Senate, but unless they threaten to block supply if their arts policy is not adopted, which they have no intention of doing, they are essentially shooting blanks that can impress, but can achieve little. Labor is once again appealing to its core constituency in the arts and has advanced a concrete plan and policy, in Dreyfus' words, to repair and restore the arts from its present state of chaos and confusion.”

In July, after eight days of vote counting and recounting, the incumbent conservative Coalition government of Australia was re-elected to office with a majority of one seat. It has no Arts policy and the rebranded National Program for Excellence in the Arts - ‘Catalyst’ still exists. The Australia Council is still in a sorry state. The current arts minister is “happy to consult widely with the sector. As far as the arts are concerned: crisis, what crisis? It is business as usual.” …where arts in Australia are part of a ‘creative industry’.

Ben Eltham, an academic and journalist of considerable repute in Australia, reported on the power structures informing cultural policy in Australia throughout the chaotic period from 2013 through to and including the lead up to the July 2016 election. He played, and still plays an important role in galvanising energies and articulating a collective voice for activism across arts sectors. He has helped shape effective arts advocacy with his clarity and conviction. I and many others are indebted to his perspicacity and civic engagement.
In writing this overview, I have drawn from his thoughtful and succinct Platform Paper essay ‘When the Goal Posts Move: Patronage, power and resistance in Australian cultural policy 2013 – 16’ published by Currency House in August 2016 and available on-line.

For the past 15 years Jude has created and directed small and large scale Live Art works that bring artists together to build ephemeral adventures for and with audiences. Her work focuses on researching and testing conventions of live performance practice and audience engagement. Jude has worked alongside renowned contemporary artistic directors in Chile, U.S.A, Italy, and France, and has directed and produced over forty Live Art productions both within Australia and internationally. In 2004 she founded Live Arts organisation – Punctum, in Castlemaine, Australia for which she is Artistic Director. Over the past 15 years, Live Art productions she has directed have been commissioned by some of Europe’s major international contemporary performance festivals and most recently the European Capital of Culture MONS2015. www.punctum.com.au