An Opposite is Made Visible by Another

A prominent theatre figure in Lebanon and the Arab region, Hanane Haj Ali reflects in this piece on the personal and professional encounters that have made her the free woman she is today. With her upcoming work, Jogging—theatre in progress, which will be avant-premiered at the IETM Satellite meeting in Beirut, Hanane challenges legal, political, and social censorship and unfailingly reveals herself as an inspiration.—Geoliane Arab.

Ever since my friend attended the rehearsals for my last play Jogging and made only one remark, “What a free woman you are!” I have been trying to discern its seriousness or truthfulness—as a mother, citizen, and actress full of contradictions. How can I accept this view of freedom while being a headscarf-wearing actress? How can I not doubt this description after having experienced the limitations of the ground I stand on, especially when I fell in love with the character Almasa, the protagonist of the play Rituals of Signals and Transformation by the late Syrian playwright Saadallah Wannous. In the play Damascus is shaken when Naqib Al-Ashraf (honorific title given to the descendants of Prophet Mohammad), the leader of the nobility, is caught fooling around with a whore. The Mufti—the city’s top religious official—allies himself with the Naqib despite their enmity and plots with his wife who agrees to replace the whore, as if the Naqib was caught in the act with his wife instead. Roles switch as the chief of police is jailed for false accusation while Naqib Al-Ashraf and his wife are freed. When the wife is divorced in accordance with her plot agreement with the Mufti, she leaves behind her previous life to become a whore and changes her name to Almasa. Men are infatuated with her as she causes havoc in the city of Aleppo. As for the Naqib, he wants to become a Sufi, hoping to reach his divine self, and the Mufti falls in love with Almasa. The play ends when Almasa is killed by her brother.

The character Almasa was created by Wannous from the heart of that sacred and profane trinity of politics, religion, and sex. She was a character I would not dare incarnate on stage! A character from an honorable caste, who chooses to throw down her veil, repudiate her husband and her place in society by employing her body’s charm to undress all the lies, hypocrisy, and malice of men’s society is a character like no other character in the history of our theatre.

Almasa the whore charms us as readers, actors, and audience members because of the greatness of daring to go against haram (prohibition) by fully becoming a prostitute and uncovering the true ugliness of the fake halal, the sacred that has been profaned, an opposition that renders true profanity more favorable! Almasa chooses to sin, revealing the hypocritical aspect of faith. She embraces prostitution in order to purge herself of the immorality practiced by the religious and political authorities who proclaim the defense of the religious and moral values while they are practicing debauchery, and who pretend to be protecting the interests of the nation while they are totally corrupted forbidding free speech and equal rights in order to protect their own interests. 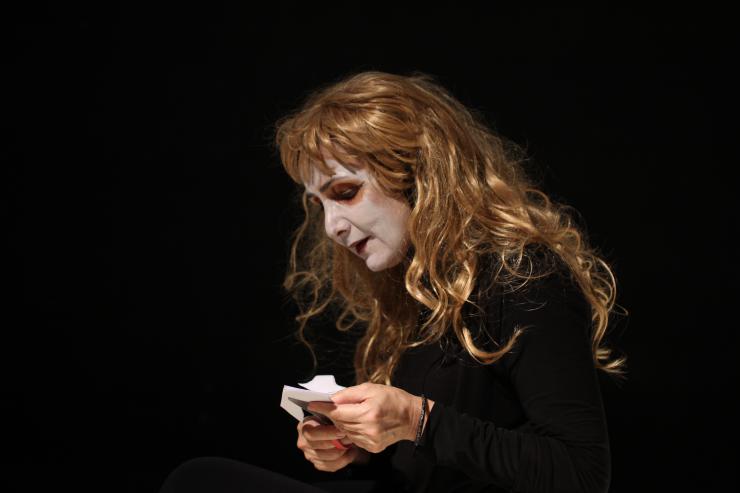 Almasa seduces us. Once when the play was performed in Aleppo, the real-life mufti issued a fatwa against the play. For me, Hanan Hajj Ali, “the unique actress whose veil of freedom extends to the deepest depths,” as one critic described me, I discovered the extent of the challenge she posed to me at the time of my first encounter with her character. I was longing for the freedom that Wannous had broken through when he subverted the known and decaying tradition of theatre. But at the time, I did not dare follow my longing. Between my personal stance and the stances of political and religious authority live whole communities who not only agree but also submit themselves to contribute to such campaigns of censorship that protect morality, malicious as it were. The basic human right of free expression which is adopted by our constitution is paradoxically banned by a series of laws and social conventions. It is systematic, barbaric, and layered domestication of censorship, not to mention self-censorship. I didn’t dare allow myself to taste the freedom of that creative expression.

Today, following four decades of creative and “political” work, and cultural activity through which, with a group of cultural operators, I am trying to stay organically connected to issues concerning civil rights and freedom, there have been alliances as well as falling-outs in the relation of self and other. But we have achieved a small amount of success in instilling change, which has taught us not to shed tears at moments of defeat but rather realize that the possible and impossible, as much as life and death, are two sides of the same coin.

Throughout my journey I have fought many battles that lasted for years. Inspired by exceptional artists, such as performers Rida Khoury and Renee Dik, I challenged many taboos to become an actress in a society that considers the artist a woman of ill-repute. It was not easier to marry the man I loved, to become the wife of a man who comes from a Christian Maronite background. Many affairs like ours took place between Sunnis, Shia, Maronite, Orthodox, and Druze during the civil war. That war that is called civil brought strife among some groups and individuals on the one hand, and on the other, reorganized others’ priorities that ultimately chose unity in diversity. It was not easy for me to wear a miniskirt and a bikini, as much as it wasn’t easy to wear a headscarf by my own choice—and not only for religious reasons—but for aesthetic and humanistic reasons as well. With all the negative stereotyping imposed upon the headscarf’s symbolism, I wanted people not to forget that a veiled, creative, and free woman is not only possible but also inexorable. I was inspired by my headscarf-wearing grandmother, an artist, creator, and believer who convinced me that God is beautiful and loves beauty, and who taught me singing, dancing, and poetry. Through her I discovered that a truthful vow made between two lovers, in the presence of two civilian witnesses, is an absolutely legal marriage blessed by Divine Providence, without the need for the mediation of a cleric. That is how I got married and I wish for my children the same vow as well as for their children’s children. This is a matter that faces many obstacles, like two red lines: one for the separation of state from religion, therefore breaking the ties between citizenship and sect, and the second the right for Lebanese women to pass their nationality and identity to their children.

Since I chose theatre, I have practiced it instinctively as a way open to life. In my professional evolution and the growth of my experience, I am more convinced of the practice of theatre as a way of life and am more aware of the responsibility at the core of the practice of theatre, starting from the birth of the “Theatron” in ancient Greece from where we can really see, we as citizens, both audience and actors. The audience can see into the space of acting, into the actors, their incarnations and other citizens while the actors see the citizens’ image and the image of the city, the audience, the core of democracy that has given them the right to political speech and discussion, the reason for the city’s existence itself. This form of agora, of free space, is still possible, and the closest example to mind is “Art Square” in Egypt. 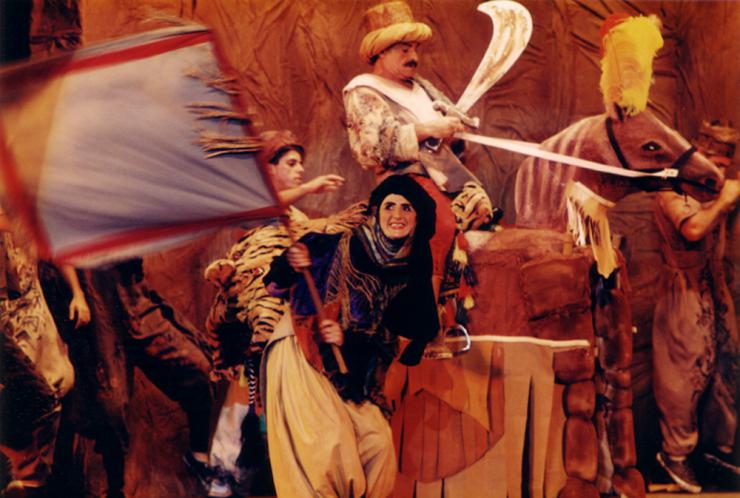 The idea for Art Square came after the Egyptian revolution in April 2011. Cultural and arts activities were held in several Egyptian provinces at the same time, on the first Saturday of each month. Even though these events were held in several cities, the most famous was in Cairo by the Abdeen Palace, close to Tahrir Square. At the time Art Square was the return of the right of people to use public spaces for gathering and free expression and to maintain and nourish the flow of different artistic expressions that flourished in Tahrir Square during sit-ins and demonstrations between January 25 and February 11. Art Square has become a sign of the revolution’s absence after security forces banned it in the shadow of Sisi’s military regime.

This example of the great challenge between liberation and art, and in between rivers of bloodshed leading to Rabaa Square, one of the most dangerous incidents in recent Egyptian history. Rabaa (which translates as fourth and refers to Rabaa Al Adawiya, a female Muslim saint) and Nahda Square protest massacres are a military operation that took place on August 14, 2013, when police forces and the army shut down protestors against the coup of July 3, 2013. The main protests took place in Rabaa in Cairo and Nahda Square in Giza. The number of casualties and injured varies: the Egyptian Ministry of Health estimated 670 people killed and 4,400 injured. Human Rights Watch described the events as a crime against humanity, and the most dangerous incident in recent Egyptian history. The Egyptian government and human rights organizations decried the report, calling it politicized.

For those bodies, souls, voices, eyes, and thoughts that have regained their right to freedom even if for a moment, things will never be as before. So do we chose to join this stream or do we stay away of it staring at this flood while we are about to die of thirst?