Is Art the Best Way to Tell the Truth?

Wael Qadour, playwright and threatre director, not only asks the right questions, but dares to ask them at an unlikely time. While most people today defend artists’ absolute right to express themselves, Wael takes a step back and delivers a nuanced piece on the responsibility of artists and cultural professionals in building and voicing the discourse on freedom of expression.­­ – Geoliane Arab, series curator.

Despite my conviction that the role of art is not necessarily limited to speaking the truth, and that art is not merely a means of communication anyway, in 2014 I agreed to supervise a theatre performance based on true stories and personal experiences of inequality of twenty-two young people from Jordan and Syria living in Irbid, northern Jordan.

This type of theatre didn’t pay much attention to the artistic quality of the final production but rather focused on the artistic process during rehearsals, which gave participants a set of skills and tools that allowed them to rethink their surrounding, therefore improving the social conditions governing their lives.

During the first few weeks, I was amazed by the large number of personal accounts relating to inequality that were recounted to us by participants or put into the production through various artistic media such as singing or dance.

The participants had the drive to tell the truth brutally and forcefully, without any hesitation. Angry and irreverent, they did not want to sweet-talk this world nor did they want to accept or understand it. All they wanted to do was raise their voices and tell the truth, as it is, at once beautiful and ugly.

I saw in their impulse an embodiment of the spirit of rebellion that lives in each artist. Artists dream of an alternative world; they carry inside them that primal scream that exposes the world’s brutality. They reject all forms of discrimination and oppression, desiring to reveal all that is concealed.

But on the other hand, in the world we live in people often don’t want to hear the truth. There are many levels of censorship in Arab society—individual, state, societal; censorship that we cannot ignore as artists. But as artists we should not accept or concede to it in any case. In a city as conservative and marginalized as Irbid, a conversation about gender, racial, religious, or sexual discrimination would seem crazy.

This experience allowed me to see that the young participants were an extension of my childish desire to slap the truth upon the world, and in return I saw into the system of complex social censorship in Irbid as an extension of my self-censorship. How can one keep the intensity, spontaneity, and truthfulness of participants’ voices without colliding with the rigid system of censorship?

In this context arose the question of how to protect participants from the consequences of their enthusiastic participation, and the fact that performing the play was a moral and artistic responsibility.

The project was in full swing; we carefully chose stories and approached them dramaturgically. We insisted upon creating a sort of equilibrium between their positive and negative aspects. Most importantly, participants were gradually able to recognize their social conditions, open up to each other, and accept their differences as factors of communication and communal living. Their confidence in themselves and each other increased, as well as confidence in the role of art in developing their capacities. 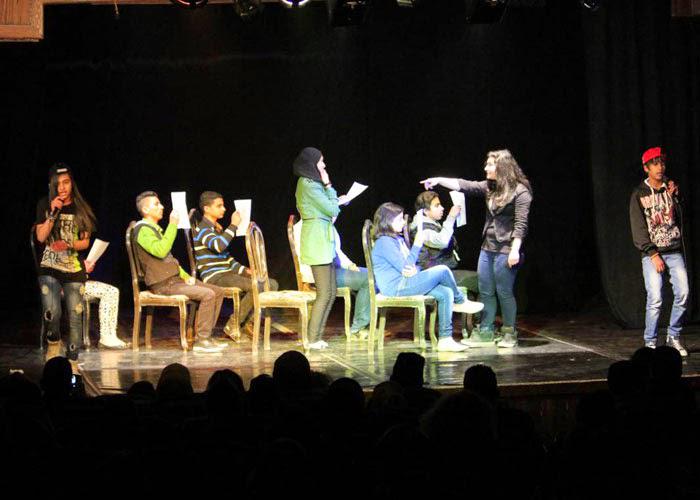 On opening night, the large performance space was buzzing with audience. They looked on to the empty stage behind which the young participants had taken their places, getting ready to “change the world.” The audience played their part: they interacted by listening, laughing loudly, or crying quietly, followed with warm applause. During the curtain call participants’ eyes were filled with love, hope, and success. Their task had been completed yet the world remained the same…was it moved a little bit? Was there a crack in that stone?

In discussion sessions that followed these performances, some commended our efforts and saluted our courage while others protested in our faces in disbelief of what we had presented on stage. We answered that these are real stories that indeed happened, and they answered predictably: “Why did you choose such negative stories instead of presenting positive ones? With these stories you are provoking societal strife and more discrimination.”

If we put aside the accusation of provoking strife, we can see that what some audience members were saying has a point. It is not enough for an incident to occur in reality for it to become material for art, an often-repeated phrase we heard from our theatre professors when we were students.

“The majority has might on its side…but right it has not,” to quote the famous Norwegian playwright Henrik Ibsen. It is a truth the author recognized and weaved into his texts that were written for European audiences roughly two hundred years ago—a dozen silent slaps without causing a public outcry.

The audience wanted us to tell them real stories that also pleased them and complemented their way of life. Though the audience never asked us to lie, they wanted one side of truth while we as artists insisted on revealing the other.

Why don’t all artists work their imaginations to create alternative ways of telling the truth? Why do some deliberately wrestle windmills or commit martyrdom at the gates of the kingdom?

Some artists believe that speaking the truth can be part of changing the world, but conversely, some or most of the audience think that problems are best dealt with through heavy silence. Artists want to place a large mirror facing this world, while the audience insist on breaking this mirror whenever faced by it.

At a first glance it seems that these are opposing actions, but they are in fact an extension of one another and possess the same essence: violence.

Artists from Arab countries often seem more tense than their audience. These artists seek to break the taboos surrounding them at the heart of conservative societies, through their performances and artworks, and do not wish their audience to be upset or angry. They arm themselves with their lists of ready-made accusations attributed to audiences, including ignorance. The artist hastily assumes the role of victim of society which is looking to hinder his or her free expression.

In our experience among hundreds of attendees, the participants only saw those who criticized the play. For some reason we did not turn to that silent mass whose silence bears acceptance and tacit solidarity with us. They were right in front of us. They accepted the performance’s message and granted us acceptance and blessing through their silence or shy compliments. They in their turn did not wish to oppose the laws of censorship or prevailing norms, but for some reason we did not see them and did not derive any positive energy, nor did we enter into dialogues or relations.

Moreover, with all that was performed on stage, the audience only saw the details that exposed everyday discrimination. This audience could not touch the energy of twenty-two participants from the new generation and their wish to build a new society free from violence and discrimination.

Freedom of expression must be guaranteed to everybody: artists as well as audiences.

Ceasing to play the role of societal guardians is the first step we have to take as artists on the way to securing and establishing freedom of expression. And though we know that one real truth may not exist, we cannot stop searching for it every day.